dbnAudile were presented with another brain-teasing rigging challenge by production company WRG for a large corporate event staged in the Crystal Ballroom at the Hilton Istanbul Bomonti Hotel & Conference Centre in Istanbul.

The design for the conference – hosted by a leading pharmaceutical brand – involved a fully immersive curved scenic set running around three sides of the room, featuring projection screens and a myriad of 3 mm LED video panels.

With no flying in the ballroom, a ground support structure was the obvious answer but the creative producers were adamant that no truss legs were allowed within the environment ensuring everyone would receive the full visual experience.

This meant that a 26m span needed to be bridged by a structure with the ability to support over three tonnes of equipment. 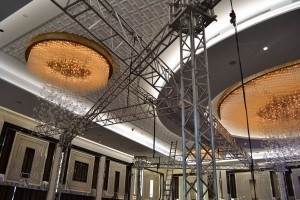 Further to these challenges, another conference was taking place in part of the room during the daytime of the build period, which severely restricted the available rigging installation time and space for the dbnAudile team led by Nick Todd!

Normally this alone would be enough to contend with… but there was more!

The room has five spectacular crystal chandeliers in the ceiling, the largest at 6 metres in diameter with elements dropping over three metres!

A massive Slick Super Beam truss was the answer, but installing the 26m long, 900mm deep front truss (usually seen spanning the king poles of large festival stages) in a hotel ballroom millimetres from the ceiling would be interesting!

The four legged Super Beam and Maxi Beam structure was easily capable of supporting all the requisite lighting, projection, AV and PA which was rigged from sub-hung Mini Beam trusses directly over the stage in the centre of the room.

The precision design left just 20mm of space between the top rail of the truss and the ceiling which ensured that all 6.5 metres of available headroom could be used as practical working space for the production.

Four Slick GS self-climbing tower systems were used to lift the top structure, fully rigged with all technical equipment which weighed close to 4 tonnes. Once at height, fixed Mini Beam legs were fitted and the GS towers removed and re-used at the other end of the room for surround sound speaker positions. 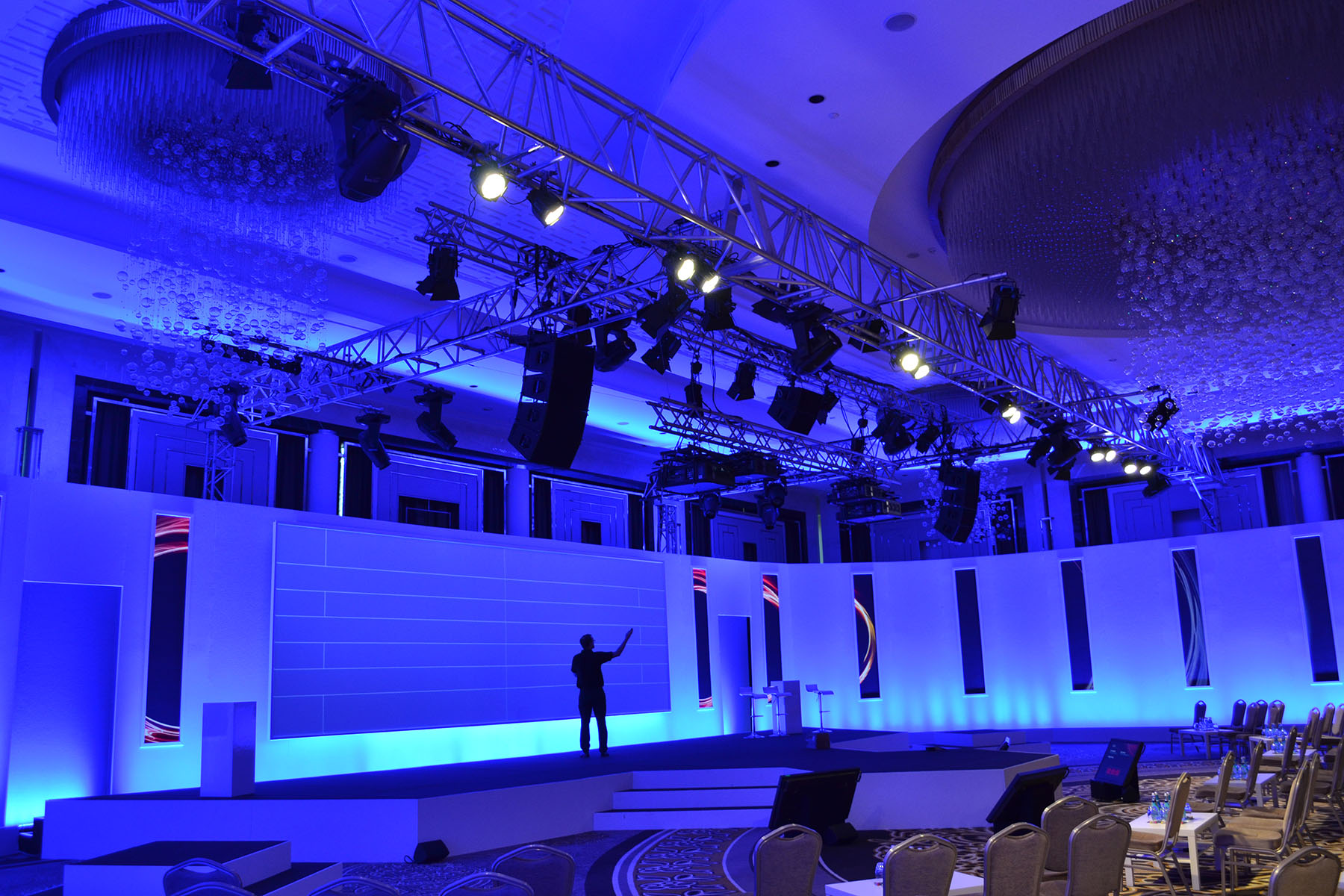 In preparation for the event, Nick used WYSIWYG to combine the truss, technical and set design into a single fully detailed 3D model which helped avoid many issues on site.

Nick and six other dbnAudile crew were in Istanbul for nine days – with the majority of the work completed in a series of intense spurts of activity.

​“I had an excellent crew, top quality equipment and we’d put in the pre-production time. Nonetheless it’s always a relief, on a project like this, to actually see the end product in place!”​